Having a bit of disappointment from my yesterday’s Art Berlin visit I decided to head today to the 2017 POSITIONS Berlin Art Fair.

It promotes itself with the slogan:

“showing what is important in the international art world”

so who could resist this?

The area where the fair took place is really in one of the coolest and artsy places in Berlin, right on the shores of the river Spree, where old factories of dozens are renovated or just waiting to be embellished and modernised for office, creative spaces.

As described on the official website, POSITIONS is also a huge art fair during the Berlin Art Week, showcasing 84 selected international galleries from 15 countries with their most significant artistic positions of contemporary and modern art.

When I arrived what immediately struck me as a contrast to Art Berlin was that the crowd, or rather visitors, was very different. It was more laid back and composed of every day people, without wanting to strike out with their appearances as trendy or following the up to date fashion. 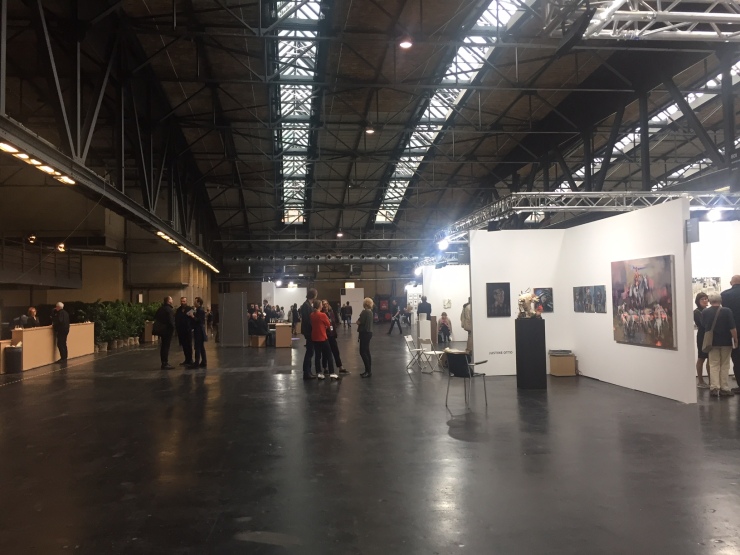 Besides this the attendance was very weak. The huge hall, with immense inner height seemed empty and forlorn with such a scarcity of visitors. I found it a pity to see this lack, especially comparing it to Art Berlin’s buzzing. However I believe the interest was more intense, the people who did come to visit Positions were really there for the art for art’s sake and not necessarily for the gossip, the trend hunting, the socialising or just chatting. This was especially felt at the cafeteria area, where the buzz was extremely low.

As it is published on Position’s official website the artworks exhibited attest to relevance and contemporaneity. My strongest impression of the artworks exhibited was the majority of figurative art. I was very surprised to see, especially after yesterday’s experience of trendy materials, that the tendency was towards more colourful, figurative subjects, created with new painting techniques.

I believe on average more people felt at home with these subjects, feeling related to people, animals, figures, the physical world even if they were communicating emotions that we do not feel comfortable with eg. anger, fear, pain. It was strikingly the opposite of the art displayed at Art Berlin.

The other interesting factor as a comparison was that most galleries had their prices out and visible besides the artworks, which showed accessible amounts to people who are art lovers but not collectors. Also there were some galleries that had absolutely no information, title or material description next to the artworks, which could have given more in depth information about the artist and the techniques used.

The art overall was simpler, focusing more on the aesthetics without any big intention to create huge buzz, noise or awe, without any technology, recycling materials or trendy video installations. The atmosphere would have deserved much more interest, liveliness, buzz and movement.

What came down immediately is that this is a secondary art fair with emerging artists having though their own trend and own line to follow.

I asked myself the same question as I did yesterday: was I inspired? Yes, of some individual artworks but no in terms of the feeling I took with me as an experience to look back upon.

I would encourage everyone to go and fill this hall up, and make it lively with your energies for the art’s sake that can be seen here. And in case you decide to go then you can visit it during the weekend (is open from 14th – 17th September 2017) here:

My aim is to inspire people to stop for an instant and feel different for a moment in time, to make them immerse in their imagination, believing in their dreams.